Author and radio/TV host Thom Hartmann was in Baraboo, WI, earlier this month for the 9th Annual Fighting Bob Fest. Couldn't be there in person but have been seeking a video and have found it, thanks to Karen, YouTube.com's user OnTheEarthProduction -- also with a website to bookmark: On the Earth Productions. (Good stuff!) Thom's talk dealt with corporate personhood, how it was based on a headnote that was NOT in the judges ruling (the 1886 Santa Clara County vs. Southern Pacific Railrood decision), and the importance of action to restore what's left of our democracy. We need to negate the effects of the recent outrageous extremist Citizens United decision. Tell our congress critters that we want them to add the word NATURAL before person in the 14th amendment of the constitution. (See MoveToAmend.org)
I just bought Thom's new book, Rebooting the American Dream. Listen, read Thom's stuff, and check out ThomHartmann.com (as well as other stuff from Karen).
Posted by Kate Anne at 7:14 PM No comments: 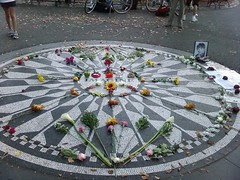 Imagine -- finally, Central Park
Originally uploaded by Kate Anne
It took my son and his friends being in town for the Porcupine Tree concert at Radio City Music Hall for me to finally get to see the Imagine mosaic at Strawberry Fields in Central Park. How New York of me! Had to play tourist with my visitors :) FYI -- it is close to the Dakota where John Lennon lived. Enter Central Park at 72nd and Central Park West. Veer a little to the left and follow the crowd. (Great Porcupine Tree concert btw.)
Posted by Kate Anne at 5:44 PM No comments:

Senator Bernie Sanders astutely asks questions about deregulation of Jacob Lew, the president's nominee to head the White House Office of Management and Budget. Despite his questionable response to the deregulation question during the hearing of the Senate Budget Committee, the panel unanimously voted to confirm him. Go figure, but Lew, a former Citigroup executive, did serve under Clinton who ran a budget surplus. Whether this helps remains to be seen, but at least Bernie asked the hard questions.
Posted by Kate Anne at 4:31 AM No comments:

My voting experience: Scanners Down!

Got to cast my primary vote, literally, at my new old site, Queen of Angels Center on Skillman in Sunnyside. Our lever machines are gone. We've got a scanning system, which worked, sort-of. There were lots of empty privacy booths when I voted. But when I collected my ballot, I was offered a privacy folder (for the actual casting into the scanner) only after I requested it. (I had watched the instruction video.) I walked to the scanners and found that they were BOTH down. Site supervisor Richard Drake said neither machine would boot up, whether plugged in or with the battery. Perhaps the batteries were upside down, he suggested, a rumor he had heard. The good news is I could deposit it in the emergency slot in the scanner where the ballots would be handcounted later, under watchful eyes: THE BEST MOST VERIABLE WAY.
Posted by Kate Anne at 8:32 PM No comments: