Two of my favorite people, Ring of Fire's Bobby Kennedy Jr. and Florida's Representative Alan Grayson speak out on Healthcare Reform, the Public Option, and SPEAKING OUT. Grayson is the GOP's #1 target for 2010. Please DONATE

As we end the first decade -- or almost end it, depending on your point of view, take a moment for a little LOL kitty humor -- quick and sweet.

With the World March for Peace and Nonviolence event at All Souls, I and a hundred or so others were conflicted from attending this event. It was great to be able to see THIS snippet from the OTHER peace event, thanks to Air America / Radio or Not's Nicole Sandler.

Celebration of World March for Peace by All Souls NY

The World March for Peace and Nonviolence was here in NYC last week and the march was celebrated at an event Dec. 2nd at All Souls in Manhattan, sponsored by their Peace Task Force and co-sponsored by other groups including Fellowship of Reconciliation, Peace Action for New York State, Metro New York Religious Campaign Against Torture, Code Pink, and Brooklyn For Peace. Joe Friendly filmed the event and made this composite video which portrays the good flavor of the evening's 2+ hour program in only 11:17 minutes. Thanks to All Souls Unitarian Church for hosting and Joe Friendly for filming -- and of course the World March for Peace and Nonviolence for marching! 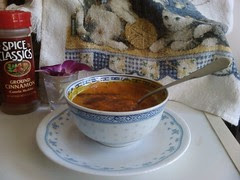 I was inspired from Tassajara Cooking by Edward Espe Brown. "The way to be a cook is to cook." The recipes in the book are sketchy but even sketchy recipes work as a recipe depends a lot on the flavors, size (relative, unless measured, and even then preference matters more), and intensity of the ingredients. The CSA season has ended and I had two small pumpkins which my share partner ceded to me. (She was pleased to be gifted with some of the soup!) I took one and dived in:

After removing seeds and stringy stuff, cut pumpkin (unpeeled worked) into one inch or so chunks. take a onion (mine was large not huge), and saute for two minutes, add the pumpkin and saute five more minutes. Then add 1 cup of water and simmer covered (stirring occasionally) for about 45 minutes until soft and watery. Puree in blender or food processor, add a little more water if necessary. Heat. Add a little sea salt, then kiss each serving with some grated cinnamon and nutmeg. Perfect for a stormy night -- or a sunny day -- whenever you have an extra pumpkin. Not just for jack-o-lanterns or pie!

Liam passed today. So very special indeed -- thank God and modern creations that his music can live on. He has blessed us with many a song and has touched many a heart. To Liam! Together with his brothers and Tommy Makem again. 1935-2009

Listen to my hero Senator Bernie Sanders' floor speech on blocking Bernanke's reappointment to the Fed -- Bernanke's leadership has been disastrous. AND the Fed should be transparent. If you care about the economy and the middle class, Bernie should be your hero, too. Follow him on Twitter as @senatorsanders