"Absolutely Torture" -- and waterboarding is only a part of what has gone on, thanks to the last administration's illegal behavior. This Chicago radio host, Erich Mancow Muller, was shocked to see how it affected him to undergo a "safe" waterboard, when he knows he could holler "uncle" and stop it. Think of the people who cannot get them to stop. They would say anything to make 'em stop. God forgive us.

Should we give to President Obama an authority we wouldn't trust to a President Bush or future Republican presidents? The policy of "preventive detention' is scary and leads us down a very slippery slope. I didn't vote for President Obama to have him legalize thought crimes or try to read my or anyone's mind. This is an outrage to traditional American values and sounds like something out of a scary science fiction movie. NO to preventive detention. (And how many people of color or liberals would be locked up by certain others following a variant of this policy??) No. No. No.

I have left the above comment on the White House comment form and urge others to do likewise and contact Congress, too. (Thanks, FireDogLake for the Rachel Maddow YouTube clip.) For more info, google and search Twitter, but also check out Glenn Greenwald here and here, especially and listen to his iTunes podcast with ACLU Attorney Ben Wizner on the subject. Also for clarity/focus/comments read Behind Blue Eyes' Obama Proposes Indefinite Preventive Detention without trial.   And remember to check for terms indefinite detention and prolonged detention. Bottom line: This is not peace-keeping, this is democracy erosion. I want my country back not a fascist America or a daddy state. Act, please.

Torture -- Is it just in the past? And should should such a past ever go unprosecuted as a "policy difference"? After Downing Street's David Swanson speaks out on TheRealNews (I just subscribed to this YouTube channel, fyi: stuff we need to hear.)

Please consider supporting the Ridgewood Democratic Club Dinner to be held June 10, 2009. (FYI, Kate Ann a/k/a Kate Anne is one of the honorees with a community service award.) Buy a journal ad and/or come. Download the form for details.

Thanks!
Posted by Kate Anne at 8:36 AM No comments: 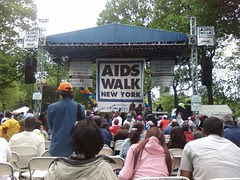 AIDS Walk 2009
Originally uploaded by Kate Anne
Leon and the Peoples sing at the post AIDS Walk concert as folks wait for the 2009 talley. Over $5.6 million was raised during tough economic times. Huzzah!
Posted by Kate Anne at 2:51 PM No comments:

Traitor Dems Cause Foreclosure Bill to go Down

Bank lobbyists persuaded traitorous conservative Democratic senators to vote against American homeowners this past week in Dick Durbin's bill which would have allowed judges to have mortgages renegotiated for Americans facing foreclosure on their mortgages on their initial homes, just like the wealthy can have done on their mortgages on second homes. Huffington Post listed their names and contact info after Arianna Huffington appeared on Countdown with Keith Olbermann. Call and tell the senators what you think of their traitorous votes (and tell them you are donating to their primary opposition -- then do it!):